Associated Engineering’s (AE) design for the rehabilitation and widening of Calgary’s Crowchild Trail Bow River Bridge improves the functionality, safety and useful life of the structure. The cost-effective and sustainable project reused the existing structure, reducing demolition, limiting waste and protecting the river, while a complex circulation plan mitigated disruption to commuters, railways and businesses.

Crowchild Trail is Calgary’s busiest transportation corridor, connecting people, goods and services from Glenmore Trail to 16e Street. The bridge, one of the few to cross the Bow River, was built in 1968. After 50 years of service, it has deteriorated badly. The city government considered numerous replacement options, some projected at over $1 billion and requiring the expropriation of several city blocks.

Instead, the city hired AE to rehabilitate the bridge based on the company‘s concept, which envisioned a wider, safer bridge by adding a full lane of traffic in each direction. This strategy, which included ramp reconfigurations, would restore the structural integrity of the substructure, increase capacity, and improve the functionality of the interchange.

Additionally, AE suggested that the construction could be completed without disrupting traffic service or nearby Canadian Pacific (CP) rail lines, eliminating the need for a temporary structure and additional investment during the period. two years of construction.

To accommodate the increased running surface and an additional line of girders on either side of the bridge, the project team explored ways to enlarge the deck, strengthen the piers and modify the transfer of the load path to the existing piers and abutments, with the aim of re-articulating the entire structure. They recommended tying the piers horizontally using an innovative encapsulation approach, which redistributes the load using the existing infrastructure, thus avoiding the demolition of the existing bridge.

The river piers were supported by a bedding spread over the bedrock. The foundations were in good condition, sufficient to support additional weight. The headers, however, had to be longer, wider and deeper to accommodate the additional beam lines.

To do this, the headers were bound using reinforced concrete. The original jetty caps have been encapsulated in the new enlarged jetty caps. This provided enough strength and horizontal stability to accommodate interface shear. The load of the headers is redistributed vertically along the shaft of the pile before arriving on the foundations.

AE designed safety upgrades for all modes of transportation, including new pedestrian lighting, increased shoulder widths, and new single-slope medial and side barriers. The intermediate diaphragms have been extended and are now architectural elements.

The project extended the life of the bridge by more than 30 years, taking into account current and future forecasts of population and traffic demand. At $27.5 million, the project saved hundreds of millions of dollars over the original replacement options. 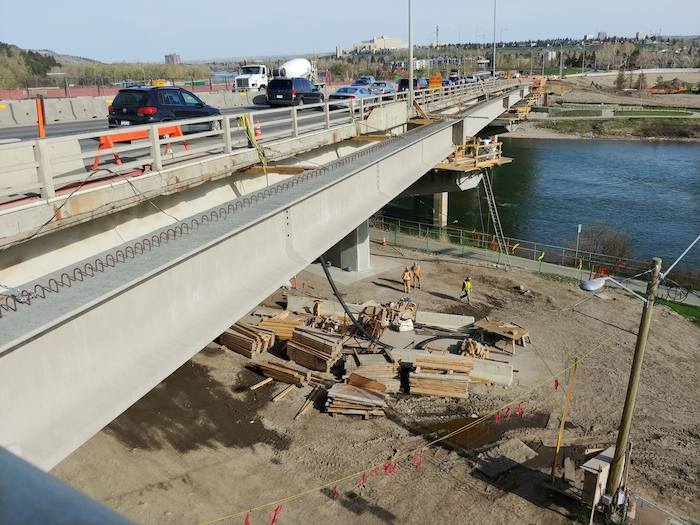 The widening of the bridge allowed the realignment of the intersection of the 10e Avenue and Bow Trail and moving Memorial Drive exit ramps. “Unraveling” the existing ramps and extending the weave distance has greatly improved safety. The original infrastructure included merge lanes and adverse ramps that created traffic jams and increased the risk of collisions.

Since the extent of the structural deterioration was unknown, AE involved the contractor from the start, at the 70% detailed design stage. The team developed a construction sequence that would maintain structural integrity and reasonable productivity to ensure the project was completed on time.

The rehabilitation and widening of the bridge was complicated by six power transmission conduits embedded in its deck. The power lines within these conduits provided much of the electrical power for southwest Calgary. Working with the utility, Enmax, AE designed and constructed a new duct alignment in the widened section of the bridge deck. To accommodate bearing replacement, AE developed a bridge lifting strategy that accommodated the traffic loads and allowable stresses in the ducts due to deflection.

Construction sequencing was planned to the hour. Services to nearby amenities and businesses remained uninterrupted, heavy traffic was safely accommodated with 3.3m wide lanes and the number of available lanes was never reduced during construction.

Exploiting and reusing existing infrastructure offered significant environmental benefits, given the size and scale of this project.

Instead of building in-stream berms, for example, the team redistributed the load to the existing land piers and abutments, so no work was required on the river pier foundations. The connection to the headers of the river piers was made from above, which further reduced the impact on the river and aquatic life. These modifications provided sufficient additional load bearing capacity for the bridge, eliminating the need to modify the river piers.

Additionally, by relocating the exit ramps from Memorial Drive, the new layout has created more green space and usable waterways on the north side of the bridge and river, as well as improved connections to the entire network of city ​​lanes.

As Calgary’s population has more than doubled in the past 50 years, the bridge has struggled to handle the increased traffic demand. This project marked the first combined widening and rehabilitation of a major bridge in service in Alberta’s history. Cost-effective restoration has improved the quality of life for commuters by establishing a more efficient transportation network that will serve Calgary for generations to come.