YIMBY attended a groundbreaking ceremony for 122 Fifth Avenue, an 11-story commercial building expansion in Union Square. Designed by STUDIOS Architecture and developed by Bromley Companies, the 300,000 square foot project includes the erection of a one-story steel-framed addition above the historic building’s parapet, as well as the construction of a reinforced concrete addition that will extend the property’s T-shaped footprint along West 17th Street. Microsoft has signed on as the anchor tenant for the office space, and athleisure company Allbirds will occupy the retail space. Omnibuld is the general contractor for the Midtown, Manhattan property.

The photographs below show the current condition of the roof, where the pavilion’s steel frame is taking shape, as well as the adjacent reinforced concrete core directly to the west. Views to the north show Hudson Yards, Manhattan West, a perfectly centered perspective of the Empire State Building, One Vanderbilt, and the many new NoMad hotels and residential towers joining the skyline. 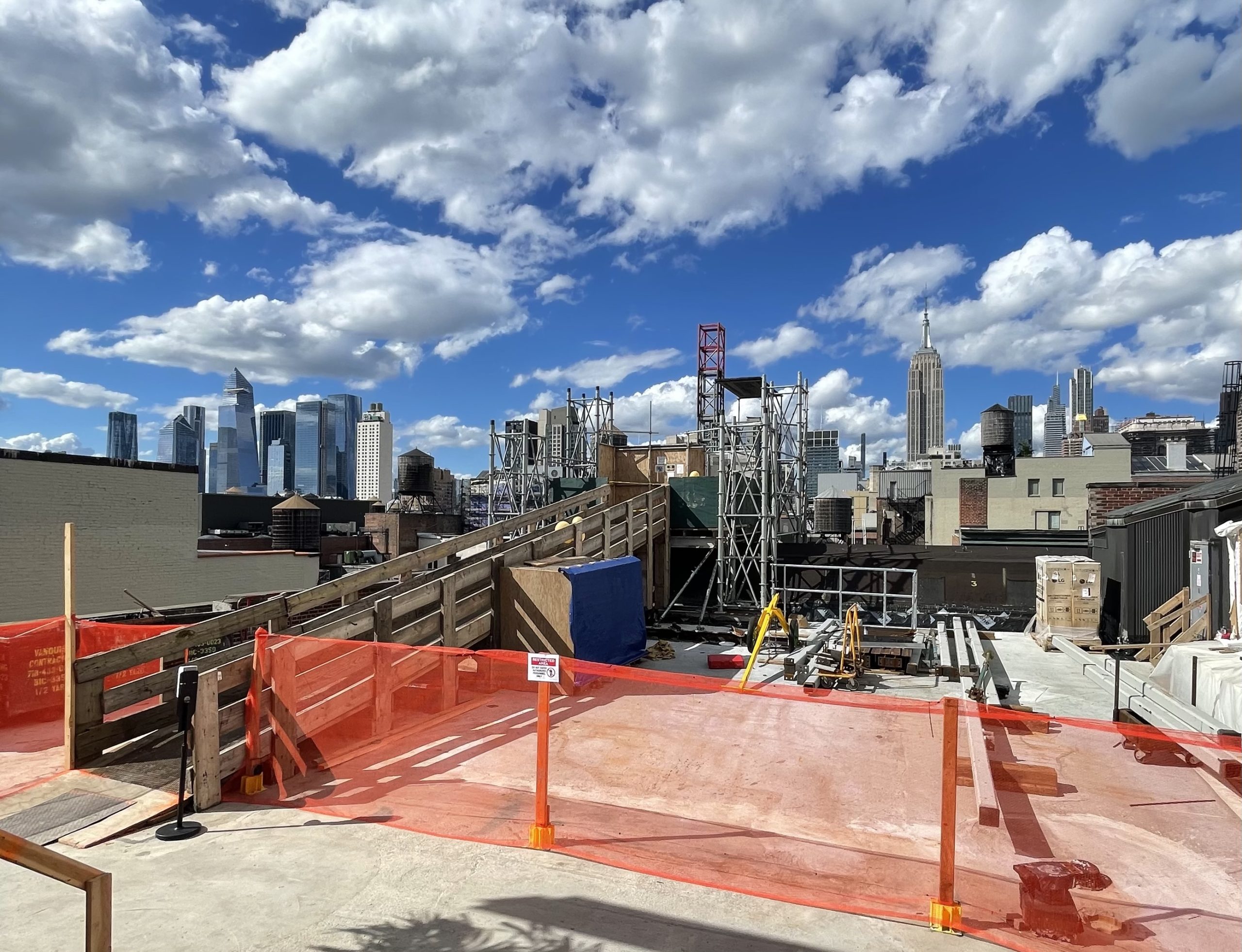 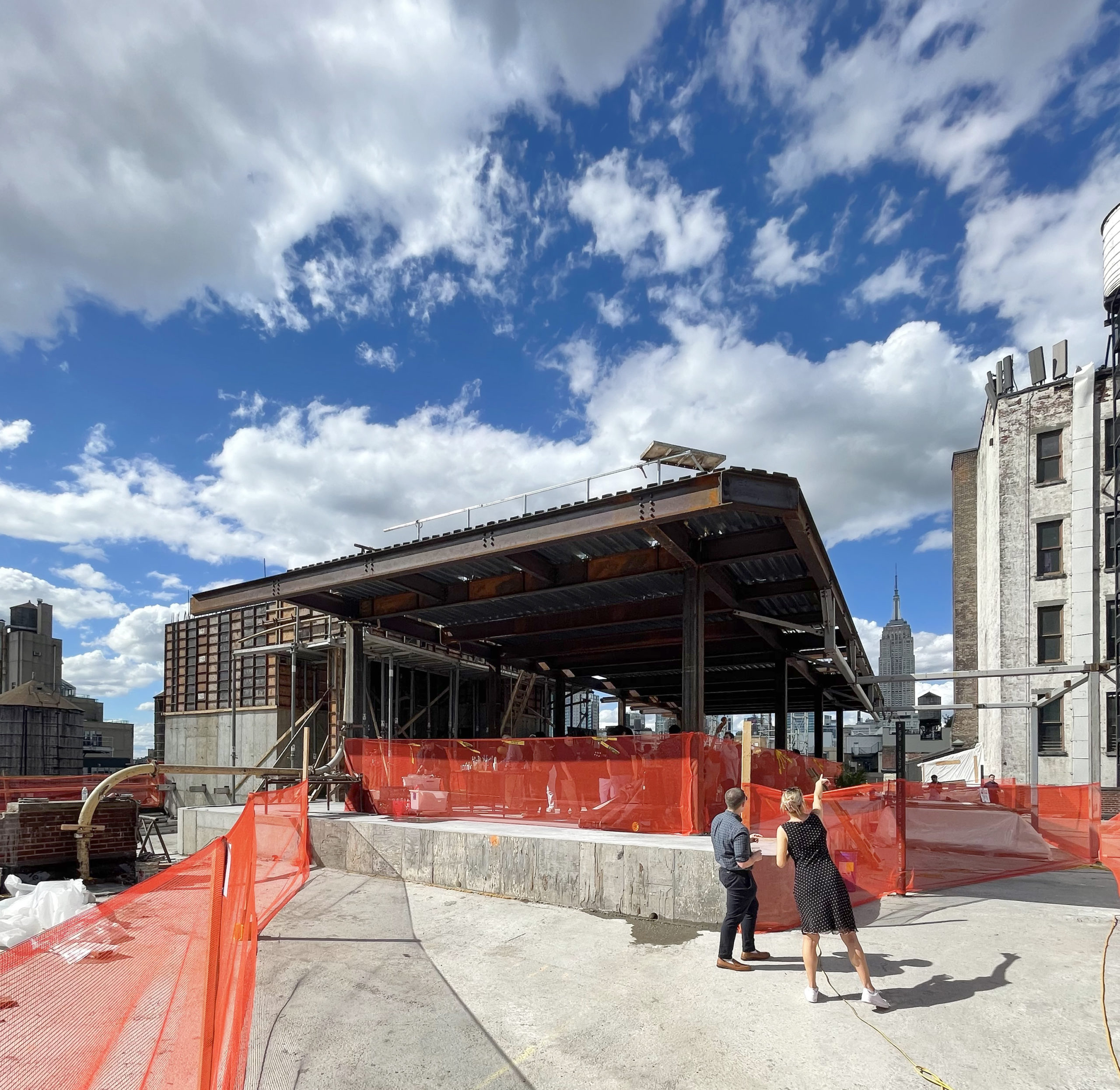 View to the north of the pavilion. Photo by Michael Young 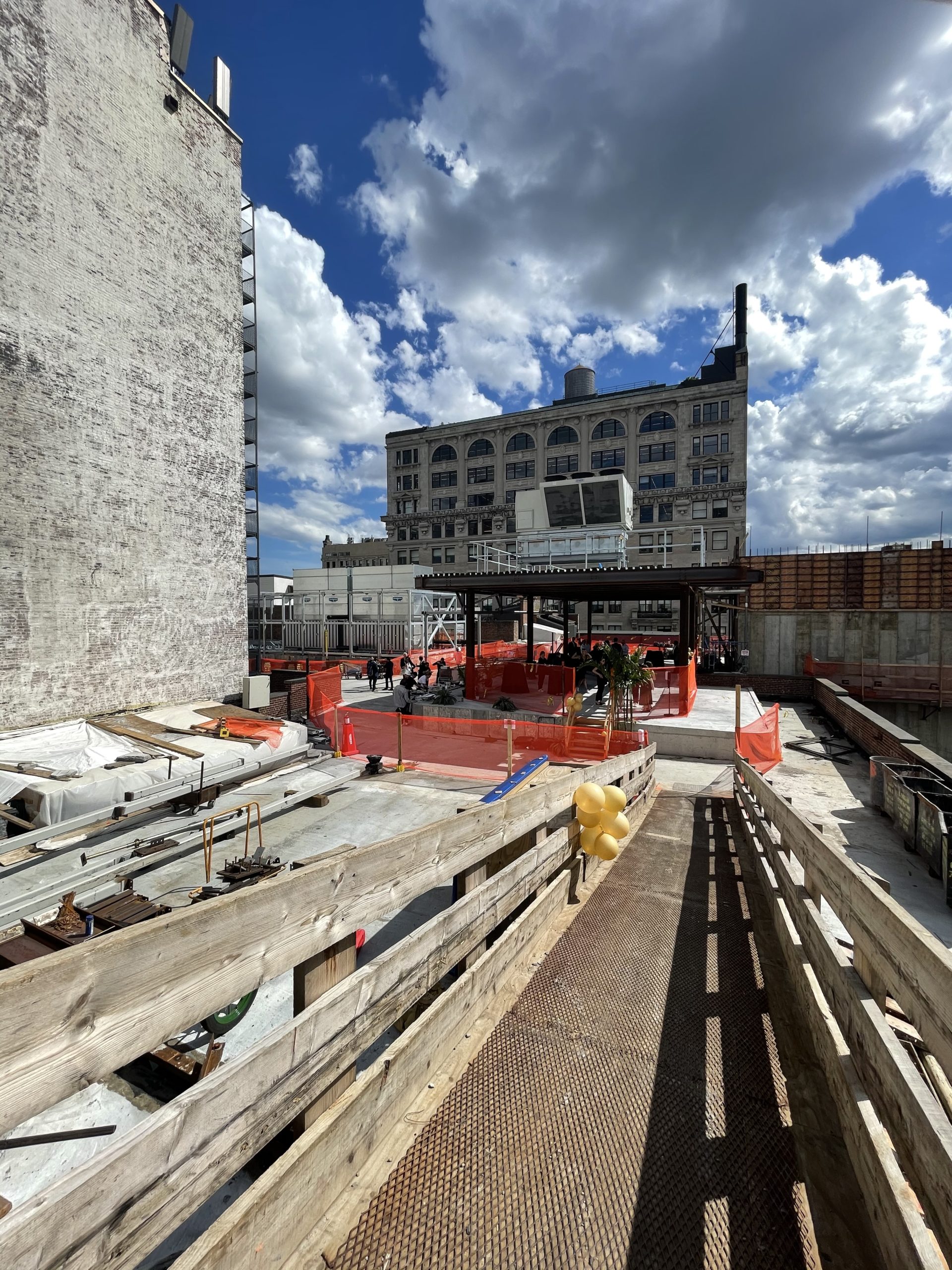 Looking south from the freight elevator. Photo by Michael Young 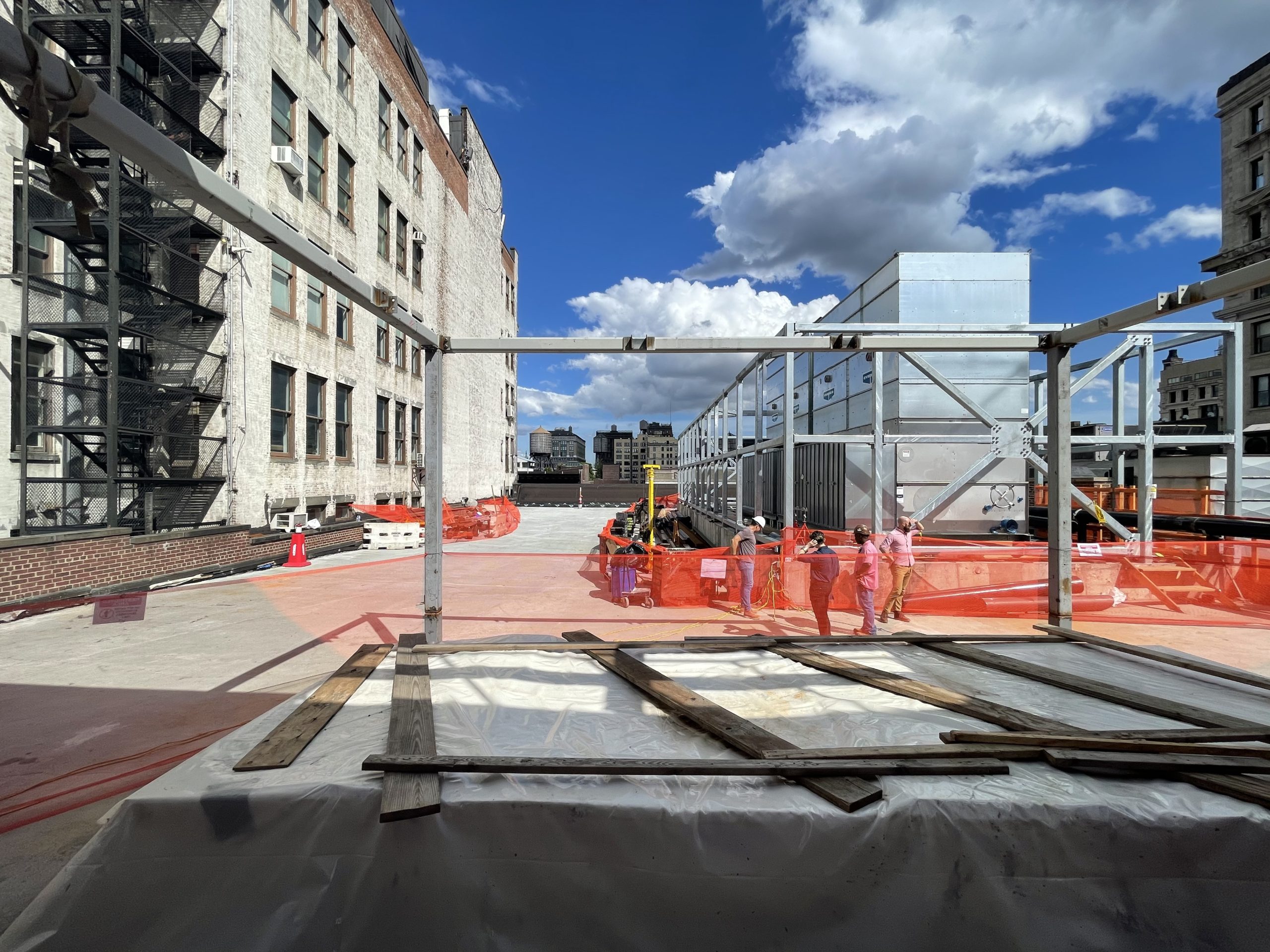 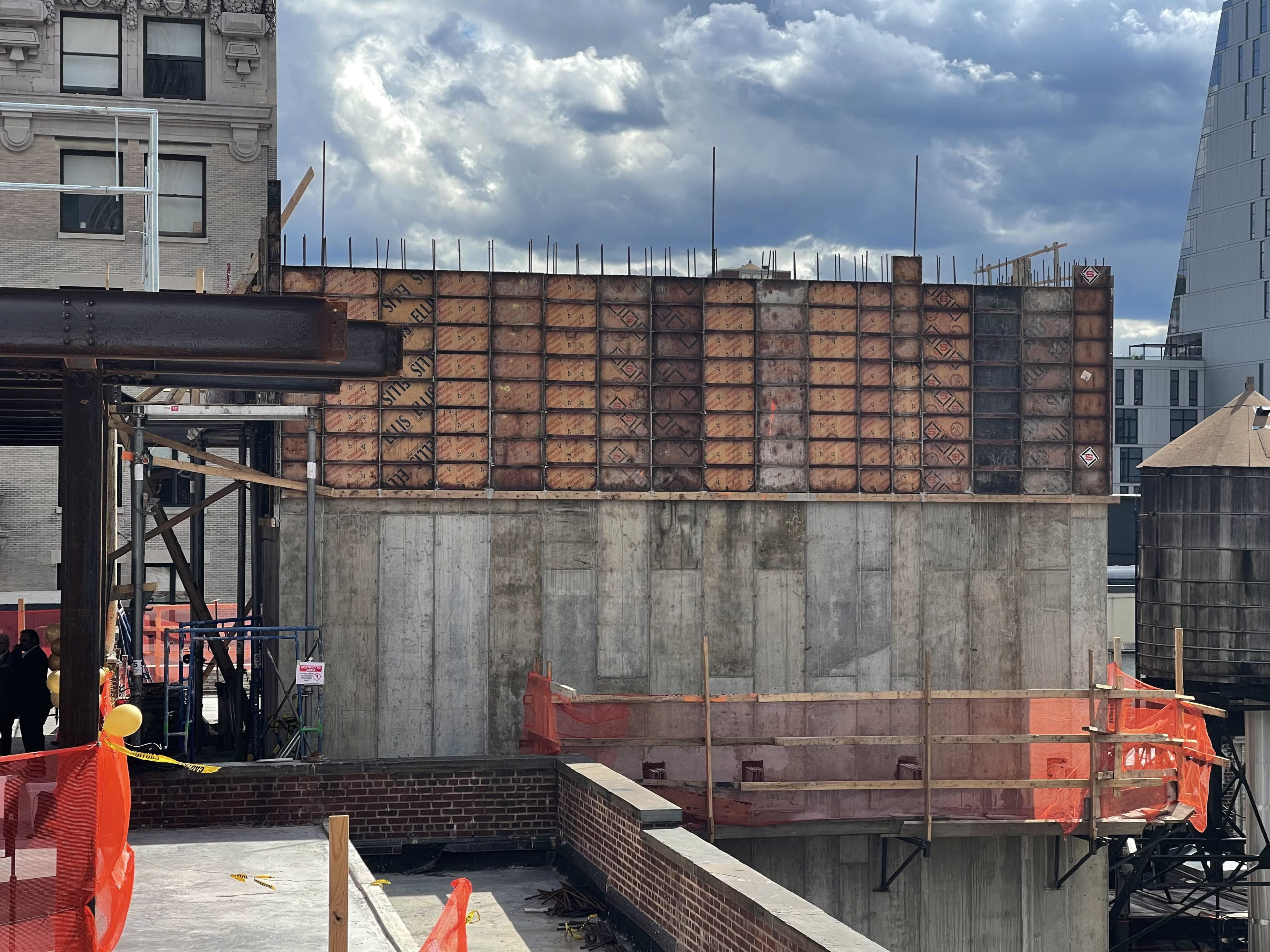 The heart of 122 Fifth Avenue. Photo by Michael Young 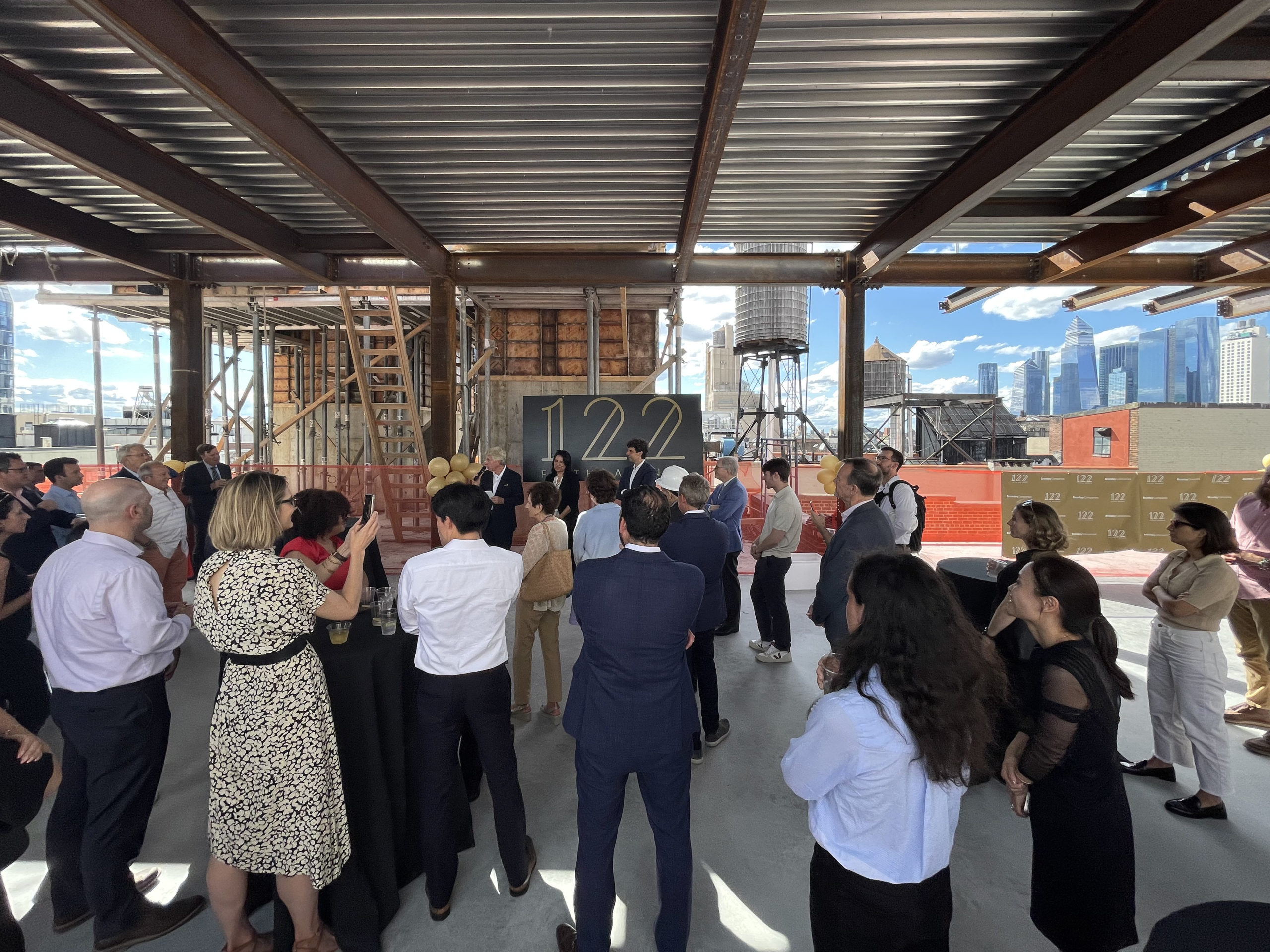 “With an all-new rooftop pavilion and over 300,000 square feet of retail space, 122 Fifth Avenue is transforming the historic Union Square neighborhood,” said Nicholas Haines, CEO of Bromley Companies. “Our goal was to incorporate the historical elements of this historic project while meeting the needs of the modern tenant. 122 Fifth Avenue seamlessly merges the neighborhood’s past and future, and we look forward to completing the project later this year.

“Today’s closure of 122 Fifth Avenue once again underscores the competitive advantage of Union Square-14th Street as a major draw for knowledge workers and other office tenants as we continue to back to the office,” said Jennifer Falk, executive director of Union Square Partnership. “As each new Union Square lease is signed, we hear again and again that staff communicate to management that they want what Union Square has to offer: a vibrant mixed-use neighborhood with its unparalleled dining, entertainment and public transportation. The Union Square Partnership is proud to work alongside The Bromley Companies on this project, which will bring hundreds of new employees to the area while enriching the neighborhood’s retail offering on the ground floor for all to enjoy.

“The Bromley Companies was founded 50 years ago; it’s no coincidence that as we celebrate this milestone, we also come together to celebrate the redevelopment of 122 Fifth, the new headquarters of one of the world’s most notable technology companies, Microsoft,” said William Haines, Chairman of Bromley Companies. “As long-term investors in the Union Square neighborhood, we have been inspired by its history and are proud to announce the completion of 122 Fifth Avenue.”

The following renderings give an overview of the appearance of the outdoor space, the interior of the pavilion and the office floors below. 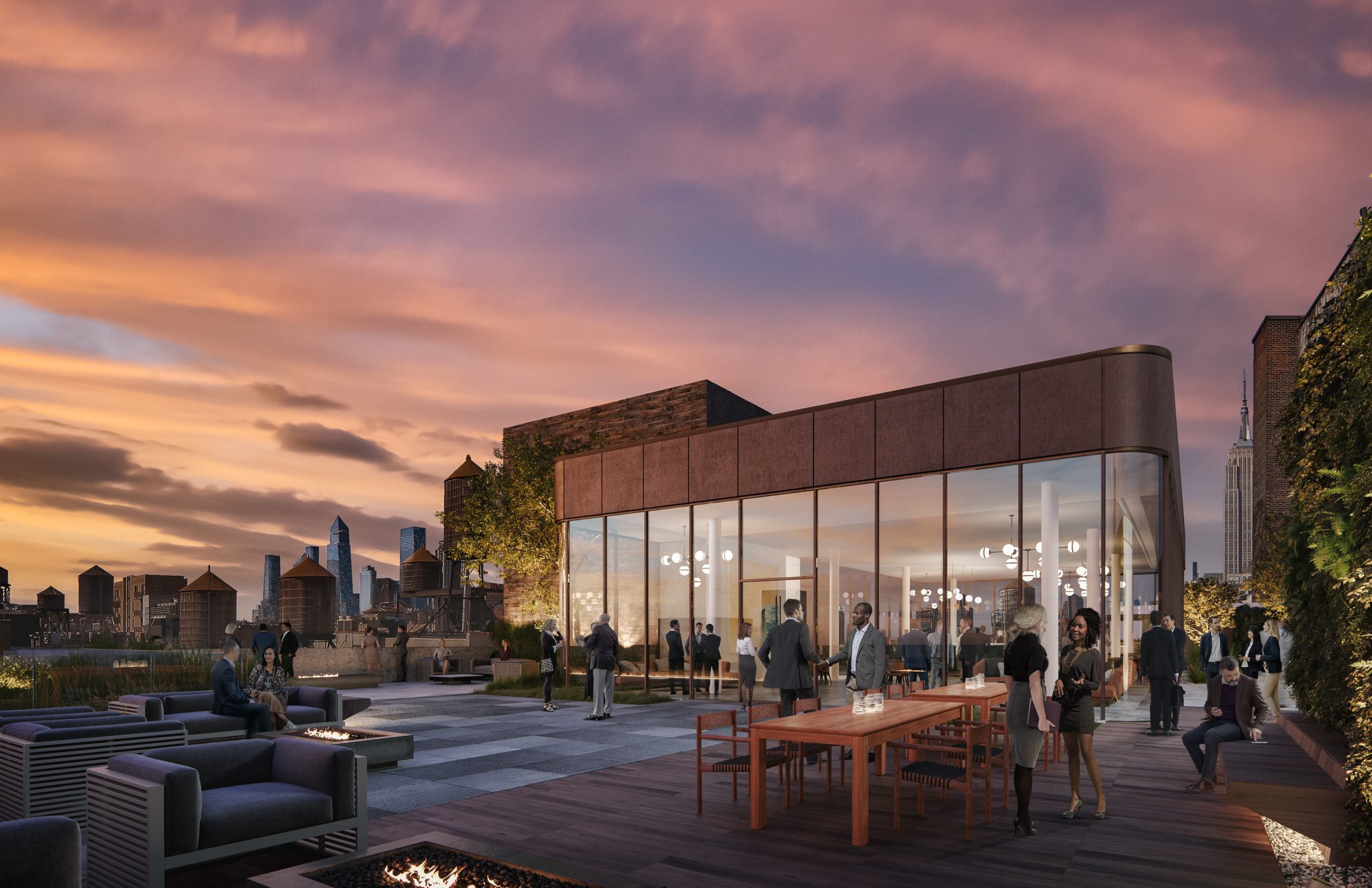 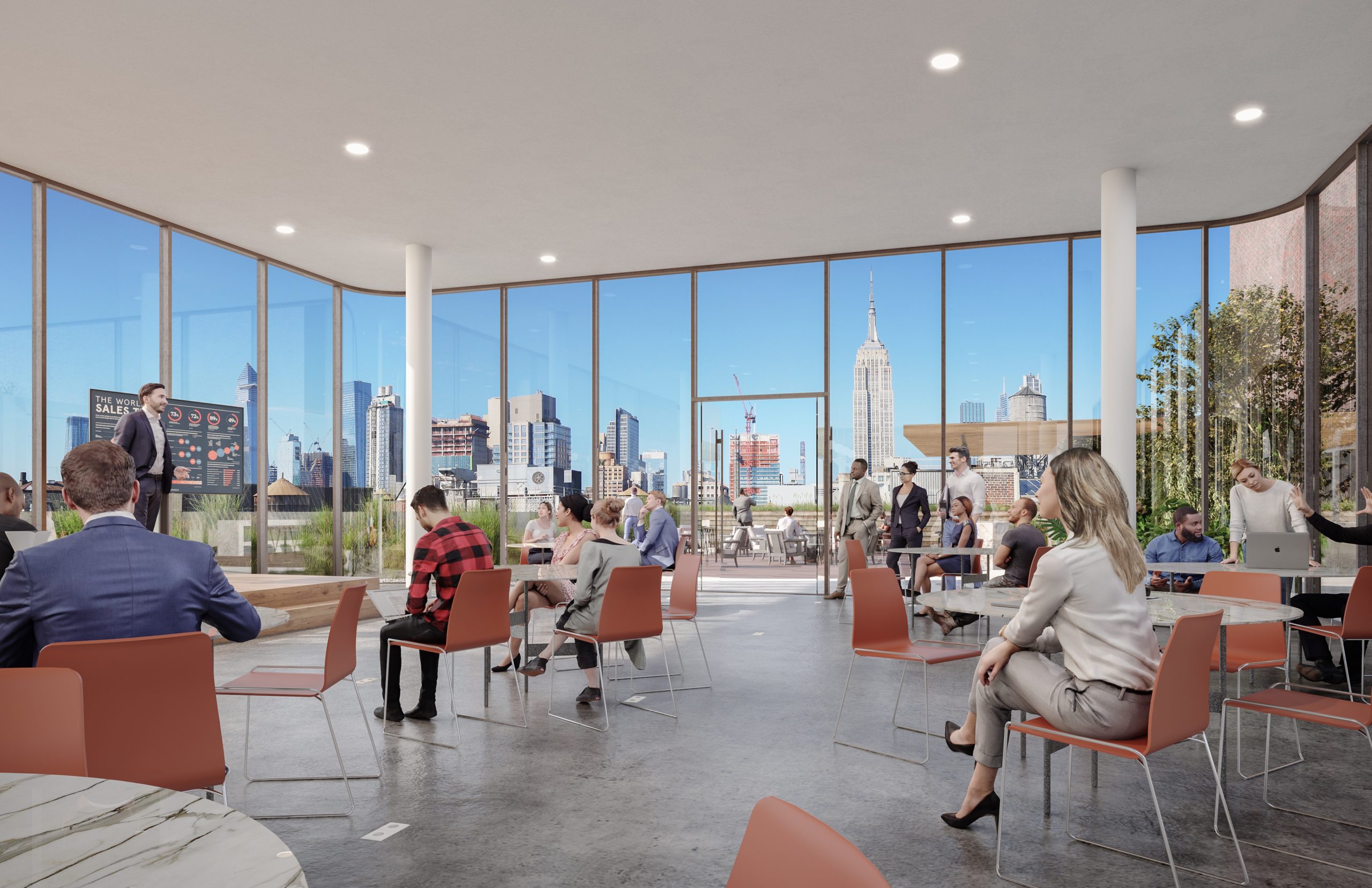 The pavilion on the roof. Rendered courtesy of Bromley Companies. 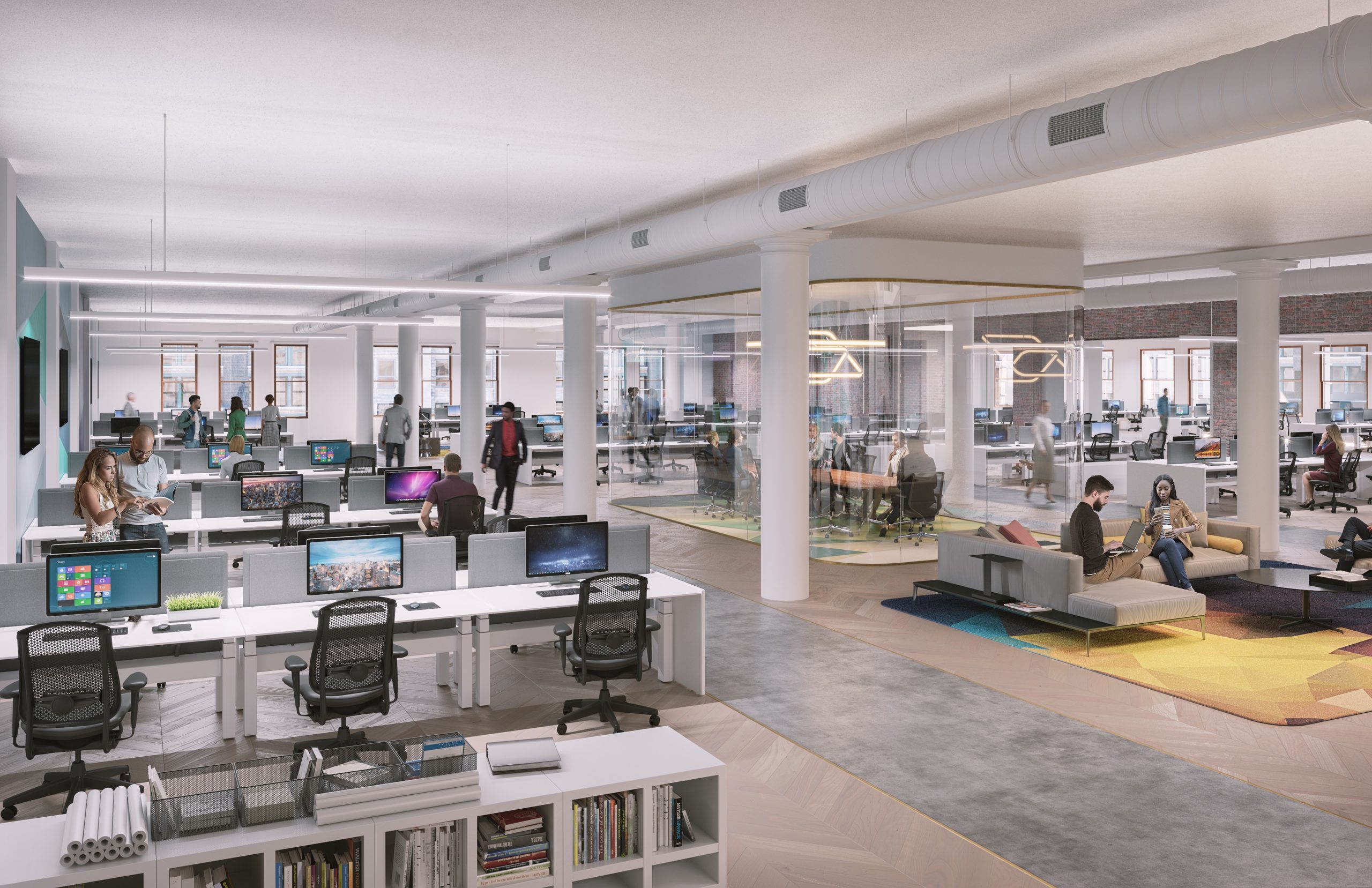 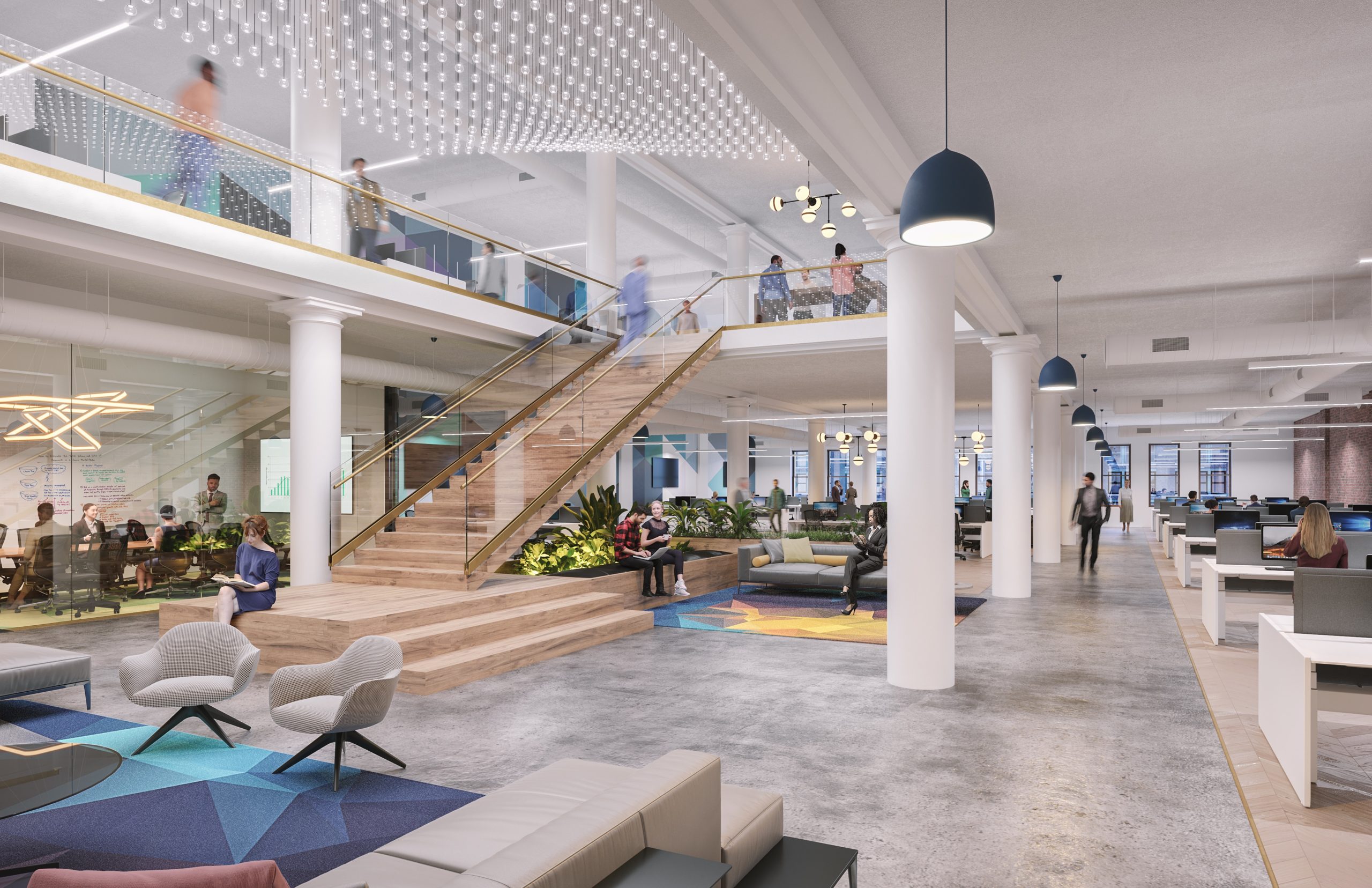 Facilities will include bike storage, shower area, cafe etc. Bromley Companies has invested $100 million for the project, which mainly consists of a horizontal expansion over an adjacent former car park and the relocation of the core, allowing for more efficient and larger office floor plates and better access to the light coming from the east.

The construction, renovation and conversion of 122 Fifth Avenue is expected to be completed in 2023.